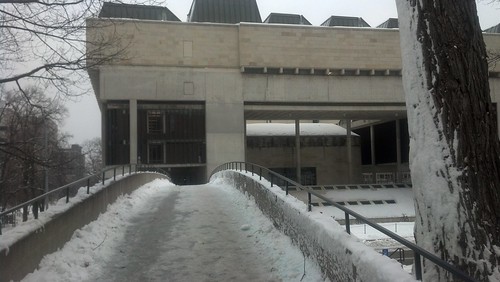 Walked around UW-madison campus yesterday. It was almost entirely deserted, peaceful, cold. The passageways between buildings were as often as not uniformly concrete, blending into the brutalist buildings themselves. There erupted, out of the sidewalk/street/passage, an occasional weird concrete sculptural element from time to time as well. Lots of new buildings, ones I didn't recognize. Less brutalist, more blandly contemporary-looking. Plaques saying "Constructed 1998". Last time I had been up around here with any frequency was high school, exploiting the university library system through my mom's university affiliation.

Earlier, on the way to campus, I accidentally passed by my dad's design firm's old office building. By "old" I mean that he'd last occupied it probably in the mid-80s. It looked small in the way that buildings do when you saw them last only as a child. The brown railing on the zigzagging wheelchair ramp --- the one I clambered over as if it were a jungle-gym --- used to be painted bright green. Inside that office, in my formative years, I palmed through a book of Pantone color swatches, confused almost to the point of anger that there were so many colors, so many that were almost red but not right. I looked for the most pure and primary red that my stubby fingers could find, and declared that to be the real red.

Saw "Minecraft: The Story of Mojang". The fact that they put up a free torrent of it perversely made me feel compelled to pay the $8 for it. Well played, reverse-psychology-majors. Well played. The movie didn't have much new information in it for me, but it'd be a great explanation of what minecraft is if you didn't already know. As it was, I still enjoyed watching it. Not entirely sure why. I guess it was just a nicely-put-together documentary, calculated to inspire warm fuzzy optimism about gaming as a medium and as a culture. (8/10)

Also saw "The Hobbit". Saw the 3d version because it was the only version playing at the time we wanted to see it. I actually am quite happy that, despite recent craziness, we (me, my mom, the sister that was not minding the baby) got to sneak away and watch an escapist fantasy movie. Too bad it was kind of more heavy on the terror and violence than I remembered from the book, though. (This may be just the fault of my memory, I admit) The rivendell scene was the only one after the party set off that seemed to have more than a moment's peace. Anyway, I understand why they blew it up into three movies, because I do feel not that I want to watch all of them, but rather that I just kind of have to. The visuals were all terribly beautiful, of course, and the Radagast bits were funny, but it didn't feel quite as narratively gripping or special or... something as the LotR films. Dunno. (6/10)

Ended up doing quite a bit of driving today for various reasons. One errand was picking up some baby items (high chair, and a foldable crib-like thingy) from my dad's house and ferrying them over to my mom's. Since my dad's been down in florida since the snowstorm, the long driveway is still covered in a foot or two of snow. It was almost kind of fun tromping down it, though my feet were kind of soaked by the end.

Had a few vivid Temps-Perdu-ish moments on the road: the corner of Mineral Point and Speedway, where Speedway heads up to Regent, where I first remember hearing the explosion of jagged piano at the climactic center of Tori Amos's "Spark" (which, incidentally, reminds me somehow of the moment at 2:48 of Niki and the Dove's video for The Fox, which has the same import to me, only visually rather than musically). The bend around Campus Drive just west of campus itself, which I associate with "Heart-Shaped Box". The corner of Regent and Monroe, which I think I nearly had an accident at in the distant past, sliding farther than I thought I would on the snow.
Collapse