So there's this panna cotta recipe that K used* on thanksgiving to great success. I tried following the instructions and... I am not sure if mine's gonna come out quite as successful. We'll see. It still has an hour or to left to set.

In the meantime, while waiting for it to do its magic in the magic cold boxfridge, I had an extra cup of heavy cream, so I just applied handmixer to it until it became this hard substance which is delicious when smeared on bread that has almost but not quite been set on fire: 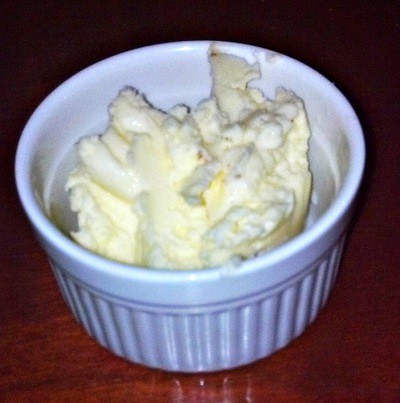 It lasted a surprisingly long time in a whipped-cream-state before turning ever so slightly grainy and then eventually separating into buttermilk and butter chunks. This account of buttermaking seems to insist that you're supposed to agitate it some more after the initial buttermilk straining, but I was too lazy and it seemed to turn out just great after only one strain.

*except she did rosewater instead of vanilla. I just sloshed in some cheap vanilla extract.

ETA: The panna cotta came out great. O, weird-ice-cream-jello-pudding, you are the best dessert. I didn't have any fruit syrup to put on it (which seems to go really well with it: Keste had some blueberry on theirs, and K used raspberry, neither of which are even my favorite fruit by a long shot, but I still found them both delicious) but maple syrup and a pinch of cinnamon was still very tasty.
Collapse