Here's another pretty picture of math: 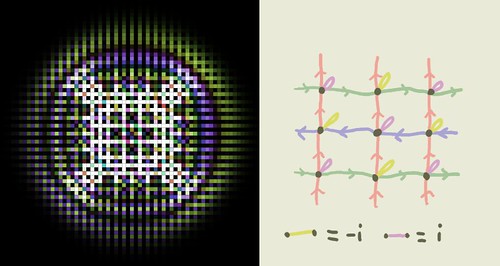 Each directed edge in the graph represents a term in a big Hamiltonian (or, more precisely, i times the Hamiltonian) that looks like

as indicated. The vertical columns of arrows always run up, and the horizontal rows of arrows alternate left and right as you go up, and the i/-i self-edges alternate checkerboardily. This guarantees that the sign of (for instance) an up-right path is always the negative of a right-up path: so those two possibilities cancel out. Also, a [self-loop then take a step] cancels out a [take a step then self-loop]. The only two-step paths that don't cancel in this way are
(a) two steps in the same direction
(b) a step forward and then back in the same direction
(c) two self-loops
When I try to compute the double-time derivative of the wave-function ψtt, (a) and (b) together yield a ∇2 term, and (c) yields -ψ. So I wind up with a Klein-Gordon □2ψ = -ψ.

The picture on the left is an implementation of this, and indeed it looks more properly circular than my last attempt!
Collapse