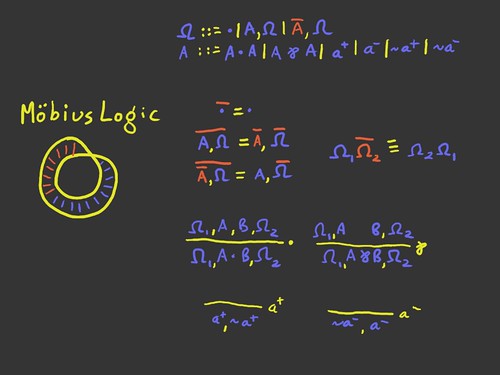 Möbius logic! As you well know, if you try to take ordered logic and make it classical, it seems to want to force the context into a loop. (The reasons for this are mysterious, but I think some ideas that came out of my work with Frank on resource semantics of substructural logics have something quite intriguing to say here about focusing and Belnap's "display" property...)

However, if you think cyclic ordered logic proves too many things, I think I can offer you a more conservative logic. My claim is you can get away with forcing propositions to judgmentally "flip over" (in my notation above, acquire an overbar marking) into bizarro-world versions of themselves when they wrap around from one side of the context to the next. The cost is that you really have to pay attention to polarity. A positive atom needs to have its dual on a particular side to vanish in a puff of identity-rule smoke, and a negative atom on the other side. Furthermore you need to know the full polarization structure of a larger proposition to be able to compute its dual. I think I might actually need to introduce a möbiusy-flipping logical connective to say that the negation of a shift is the flip of the shift of the negation. Or maybe you really believe that, in any proper classical logic, the negation of a shift should be the (opposite-direction) shift of the negation. In which case you're forced into regular old (!) cyclic ordered logic.
Collapse