K and I had a bit of a food adventure making chicken vindaloo. Here's a picture she took of it: 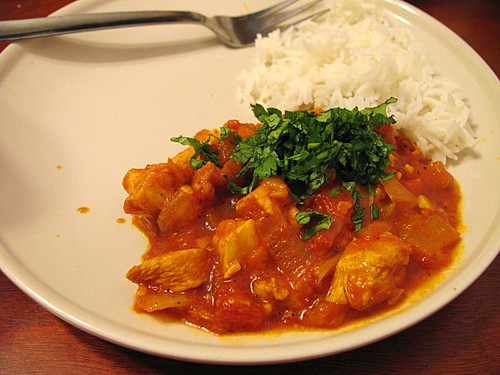 I've always been too nervous to try indian food in restaurants because of allergies and stuff, but making it from scratch obviated that problem. It turned out terrific, spicy and chewy and yummm.

This is the recipe K found that we started from. Differences included:
* recipe was halved, and the two of us still struggled (but successfully) to finish it off
* except for I guess we still threw a whole onion in
* cardamom was dropped, since it was $15 for the smallest container we could find
* cayenne pepper was replaced by chili powder because I misremembered what spices I'd already bought
* garlic was upped a bit to 5 cloves instead of 4
* used a bit more tomato and a bit less water
* curry powder itself was not particularly hot, but I personally added back in a bit of Valentina hot sauce on mine, which was delicious.
Collapse