Man so I was reading a little bit about Reed-Solomon codes and got sidetracked into reading some remedial stuff about finite field theory [pdf link] and that is some really crazy stuff, you know? It makes me really feel like Not a Real Mathematician that I still know so little about it. But I guess there's a lot of simple-looking things about the subject that are nonetheless deep, and which nobody really knows a full explanation of.

Like, I accepted long ago that the distribution of primes themselves was sort of random, even as abhorrent as it feels to accept that some random bullshit arises out of such a simple definition (and it's not even pretty random bullshit in the same sense as the mandelbrot set arising out of just z2 + c). But the distribution of which numbers are primitive roots in Z/(p)? 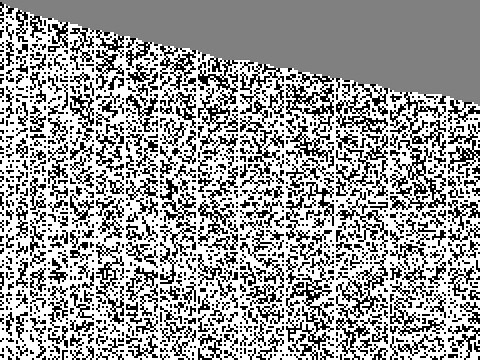 Just looks like a bunch of garbage, with the exception of vertical white stripes because perfect squares can't be primitive roots. X-axis is natural numbers n, Y-axis is primes p, and the coloration is black if n is a "primitive root mod p", that is, if the powers 1,n,n^2,...n^(p-2) are all distinct, white if not, and gray if n is too big to even be eligible. And then GF(p^n) for n≥1 are even more crazy. What the fuck, number theory.